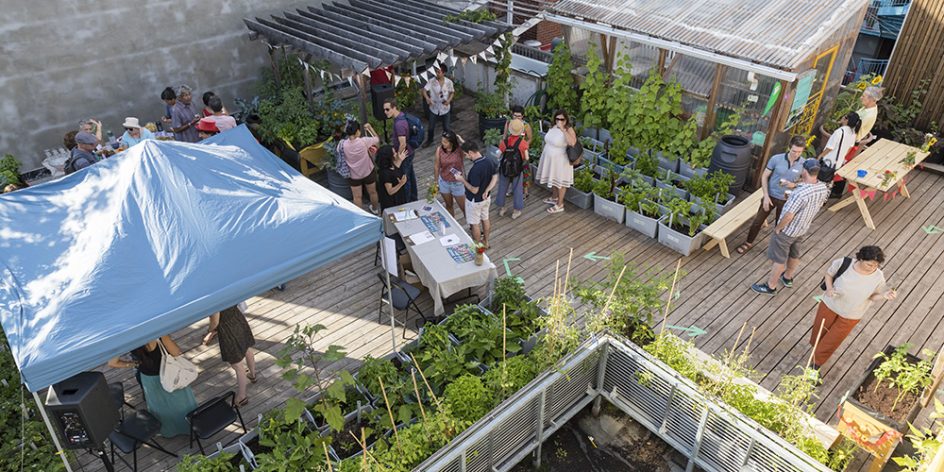 Join us on our rooftop garden this month for outdoor film screenings! We’ll be moving aside our self-watering containers and setting up a mini theatre to share some ground-breaking documentaries related to the ethics of agriculture. Come out to get cozy and learn more about the politics of our food systems.

Also, our space is now wheelchair accessible. And, all films will be accessible to both French and English speakers. Entry is a suggested $10 (PWYC) to support distributors and filmmakers. In case of rain, the screening will be moved inside.

Friday, August 24th @ 8:15pm we will be showing THE FIGHT FOR TRUE FARMING directed by Ève Lamont:

“In this documentary, crop and animal farmers in Quebec, the Canadian West, the US Northeast and France offer solutions to the social and environmental scourges of factory farming. Driven by the forces of globalization, rampant agribusiness is harming the environment and threatening the survival of farms. The proliferation of GMO crops is a further threat to biodiversity as well as to farmers’ autonomy. In Europe as well as North America, a current of resistance bringing together farmers and consumers insists that it is possible–indeed imperative–to grow food differently. The Fight for True Farming is a film of grim lucidity but also irrepressible hope.”

Thursday, August 30th @ 8:15pm we will be showing MODIFIED by Aube Giroux, followed by a discussion with the organizationVigilance OGM:

“MODIFIED is a feature-length documentary-memoir that questions why genetically modified organisms (GMOs) are not labeled on food products in Canada and the United States, despite being labeled in 64 other countries around the world. Shot over a span of ten years, the film follows the grassroots struggle to label GMO foods, exposing the cozy relationship between the biotech industry and governments. The film is anchored in the moving story of the filmmaker’s relationship to her mom, a prolific gardener, seed saver, and food activist who died of cancer while the film’s production was underway. Interweaving the personal and the political, the film uses family home video archives and playful cooking and farming vignettes from the filmmaker’s award-winning PBS cooking show, in a mouth-watering celebration of homegrown food. The mother-daughter investigative journey skillfully debunks the myth that GMOs are needed to feed the world, making a strong case for a more transparent and sustainable food system.“